With Johnny-B, we already started preparing another « Hawk » demo. Our friend Glg introduce us to Stinger, a friend of him which was on C64 scene before (« Transcom » group). He wanted to create a cracking band on Amiga and require some people to create the intros. As we were opened to new experiences we accepted working on intros for that new group.

The group was called « M.A.D ». It is acronym for « Mutual assured destruction », which is a military philosophy. Later the group will become « Paradox » but we’ll see that later.

We choosed other nickname for that « extra » adventure. Jake and Elwood, reference to the Blues Brothers movie.

Stinger gave me the internal « MAD » magazine. I still got the paper version at home. 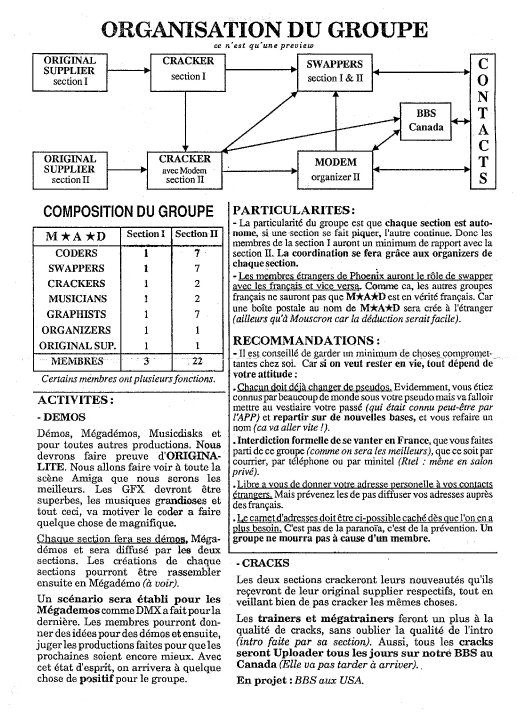 Nice font and scrolling. The logo have a bit weird pespective. The basic technic is the same as « Hawk » first demo.

This one was more technical. It displays a real time circular text scrolling.

The font used (each letter is in a vertical orientation, to easy the line drawing):

The music is cover of « Peter Gunn » theme from Blues Brother. You can listen to the original HERE. The intro voice is from Sigue Sigue Sputnik « M.A.D » music. Listen it HERE.

For real time scrolling, I use one special feature of the blitter processor.  The blitter can draw line using 16 pixels mask. So in that intro all letters in the circular part are displayed by drawing lines with the blitter (and using the letter pixels as mask). The theory was nice but when coding it, I realised that the number of lines was limited. That’s why there are some bars in the circular part, to reduce the number of total lines.

I found one module that was not used. It is Futur composer module from « Dr Gang » (also SML) : DR GANG.MAD.fc

Both intros were never used as M.A.D died in late 89. A new group was created then. It was called « Paradox ».

The intro executables can be found into: Hawk_1990_OldIntros_Oriens.zip